There are several key factors to consider when looking to trade the EURUSD and this article will help you to understand them and what makes the two currencies move. 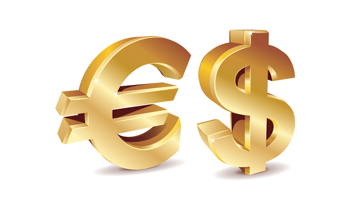 The most important thing to understand about binary options trading in currency pairs is that they are two separate currencies. Each of them is controlled by their own central banks, they will move up and down according to the strength of their economies. You are trading on the movement in these currencies; which is a result of the movement in the different economies!

Of course, it is also important to consider factors such as the economic calendar; this can affect the balance between any pair of currencies. However the EURUSD currency pair is the most liquid pair trading on the markets; it is still the most valuable currencies and trades are completed and funds change hands every single day. The spreads in this pair tend to be low which can make them appealing to currency traders and binary traders.

There are several factors which you should consider before you start any trade:

Economic news in Europe and in the US actually has very little effect on the movement of these currencies. The most important influence in Europe is the Consumer Price Index; this provides the inflation rate for Europe and combines with any output from the European Central Bank which seeks to control inflation and uses it to help, define monetary policy.

The Purchasing Manager Index also plays a part in the currency fluctuation as it will show if any sector or sectors of industry are declining, or even growing. The index also gives a good indication as to how the central bank will interpret the data and how it will react; this will depend on what type of market it believes currently exists.

Traders may also wish to look at the Gross Domestic Product and even the unemployment rate as they can affect the currency rate and the central banks decisions. A trader should also note that the currency will move whilst the European Central Bank holds its monthly meeting. Fluctuations are also possible when it holds the post meeting press conference. This is usually a direct result of the answers being given by the ECB president in response to the press representative’s questions.

The economic reports received within the month serve as a guide to what the central bank will do next. The current movement in the markets, such as a fall in inflation will usually trigger a rise in interest rates to bring inflation back in line. This will weaken the Euro against the USD and other currencies. All of this information should be taken into account before trading.

The US has regular monthly reports which are watched by every country around the world; this is because it is the largest economy in the world and its economy can have a serious affect on many other economies. The Non Farms Payroll report and inflation are the two most important reports which are released at the beginning of every month.

Other reports, such as those produced by the Institute for Supply Management, Manufacturing and Non-manufacturing reports, Retail sales, Private Payrolls and even the GDP will have an effect but to a lesser extent than the main two.

Markets fluctuate regularly and many of these movements can be seen by technical analysis. However it is the economic releases which provide the fundamental analysis and the reason for any specific mood; timing is everything.

To illustrate how timing can make a huge difference you will need to consider the effect of unexpected high unemployment in Europe. It will force the ECB to react and change monetary policy, thereby instantly weakening the Euro and prompting sales of the Euro. However, if the US then announces its GDP has dramatically reduced the USD fill suddenly reduce in value and the EUR will climb to accommodate it; the European data will now be overlooked n response to the US data.

Of course if you had invested in an option with the assumption the Euro would continue to decline you would lose your trade; simply because of the timing of an economic report!

5 minute binary options trading is a kind of trading that is related to scalping as an expiration time is very short yet with many entry points and high profits.InvestManiacs advise you to use only...

One off the most important decisions a binary options trader must make is whether to place a bull or a bear put. Understanding this is an essential part of making the right decision and placing a s...

Perhaps one of the most popular tools available to assist in choosing the right trade is the binary options Bollinger bands. The principle behind this tool was developed by John Bollinger, hence th...

The day dealing pattern applies the above mentioned index to recognize the trend line along with the Bollinger bands to be the trade spark point. The MACD features are 26 for the dynamic average, 1...

Turtle strategy trading is a unique concept which appeared as a result of a long bet between two traders- whether it is possible to teach a usual person profitable trading on Fo...

Tricks of the trade Spread trading

In the present alterable and even indefinite markets, dealers searching for the methods to provide self-protection should take into account spread trading. The spread trading strategy is purchasing...
TOPICS: Trading EURUSD