Interest Rates and Their Importance 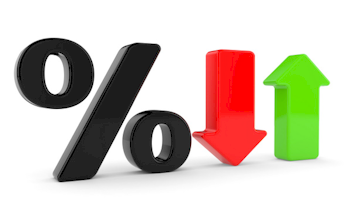 Interest rates are one of the most important guides and controls in any economy. In fact, many other economic changes are reviewed in respect of how they may affect the interest rates. Even when news is released that forewarns business people of a likely upcoming rate change this will simply focus attention in the central banks and what they could potentially do when they meet. Interest rates affect every part of life, whether you have a variable rate loan, business loan, general savings or are saving for retirement. A change in the interest rate, even by a small amount can make you drastically better or worse off. This is the main reason that they are important to everyone.

The Consumer price index is a good example of a regular report which can help to anticipate whether interest rates are likely to rise or fall.

Interest rates are also critical to investors. If you are expecting there to be a rise in the current rate of interest then you will see currency being bought; this is a good sign that you should buy a call option and make some money out of the impending rise. If course, if the rate is going down and currency is being sold then a put option will make more sense. The trick is to ride the impending rate change; this will influence buyers and allow you to capitalize before the rate actually changes.

Interest rates rise and fall for a reason; they are the main tool which the central bank will use to control inflation. An economy which is doing well will have low inflation and a relatively low interest rate; keeping both savers and borrowers happy.

The bank will react to the inflationary pressures on the economy, if the rate of inflation (the increase in price of an item over time or an increase in the available money supply),is going upwards then the market can be controlled by increasing the interest rate. This will slow down people’s buying power as their borrowing repayments will increase. In turn, a lower of consumer demand will help to prevent prices from rising significantly.

The opposite is also true; if inflation is declining then a decrease in the interest rates will improve the spending power of consumers and encourage economic growth.

It can be extremely difficult to predict what an interest rate is going to do, even when the economy appears to be slowing, there are other pressures on inflation and these can influence a central banks decision to cut or raise interest rates. Indeed, the movement of interest rates in one country will affect their currency and how it trades against other currencies throughout the world. This will be happening at the same time as both the speculation and the announcement of a rate change; it can have serious implications for any economy which provides a large amount of products to one whose interest rates are changing!

The usual approach to interest rate changes is to buy currency if the rate goes up and sell it if the rate goes down. However, most banks will try to anticipate the result of their meeting before it happens and prepare the market and consumers for the impending change before it happens. This can often mean the market has settled again by the tile the announcement is made. It is, therefore, crucial to watch and assess the press releases prior to an interest rate meeting. You can then buy or sell according to the likely trend.

In fact the central banks attempt to control inflation and interest rates to ensure there is stability in the price of products. It is for this reason they will share as much information as they can before an event; this will help to prevent sudden price movements which can be harmful to the economy in the short term. A perfect example of this is when the banks decide to raise the interest rates; this will have been hinted at before the actual interest rate meeting so will not come as a great surprise on the day. However, the rate rise may be more than expected and could still trigger a currency buying trend. To prevent this from getting out of hand and to keep prices stable the bank is likely to release a follow up statement which confirms that the interest rate increase is temporary. Investors will then be wary about purchasing too much currency and losing out as the price crashes back down. Instead of a rush to buy currency you are likely to find people selling it as the interest rate increase is announced! This will, effectively stabilize the price.

Every country has their own, defined mechanism for releasing interest rate data. This could be in a statement at the beginning of each month with a press conference following it to ensure the prices remain stable and the market reacts in the way the bank wants it to. At the same time the banks are likely to release the minutes of the meetings. These can be exceptionally useful as they will show the thoughts and reactions of the committee members. Studying these reports will enable you to understand more about the committee members and you will be able to calculate their response in future scenarios. This will allow you to invest in the market based on how you believe the committee will react to other economic influences.

It is not always easy to find a trading style or strategy which works for you. In fact, for most traders the right approach is unique to them simply because everyone has different risk factors. The...

Sometimes it can be too complicated to find out a suitable strategy to apply, specifically when it refers to the binary options dealing activity. We do our best to set up a credible fifteen minutes...

Ichimoku trading strategies are simplified with no grounded analysis or judgement required. It is considered to be a trading pattern designed in Japan. The system has been created to help market pl...

More brokers are starting to offer the possibility of trading on the binary markets in just half a minute. Until recently, one minute was seen as the fastest possible trade, however this is now cha...

Options operating is the same as placing bets in the online financial operating – here you win everything or lose it all. But there are also some distinctions in these two activities. In opti...